Are you looking for the best sterling silver wedding charms for your DIY creations? Bring the light and love of this splendid and super special occasion with Xinar’s wedding charms in 925 sterling silver. Make your DIY designs shine with the light of two people’s union with exquisitely detailed pendants that make every charm bracelet, necklace, or pair of earrings even more special. If you feel limited by what’s out there and would like to use only US-made genuine silver for your projects, you’ve come to the right place.

Xinar’s online charms store is filled with jewelry wonders to choose from. No theme or project cannot be completed by opening our online jewelry-making catalog. Xinar has been selling the finest jewelry-making supplies for over twenty years, and we firmly support the artistic vision of crafters everywhere. Don’t know what to pick? Email us, and we will give you ideas!

A Guide to Wedding Symbols

Even though most weddings have religious overtones, you might be surprised to learn that many wedding traditions have pagan or even nonreligious roots. If you’re curious about the significance of wedding symbols, look at these well-known examples.

Wheat or barley was once used to make ancient Roman wedding cakes. The cake, which was more like a loaf of bread, represented fertility. Guests were encouraged to collect cake crumbs as they fell in hopes of bringing luck to the newlyweds.

Many medieval weddings required the bride to be kidnapped so that the ceremony could proceed. Forcibly bringing the bride to the groom, the groomsmen would kidnap her from another tribe or clan. Another possibility is that the groom enlisted the help of his groomsmen to protect his bride from such abductions.

Queen Victoria of England popularized white wedding gowns, which were seen as a symbol of purity and innocence for the bride.

As typical as the white gown is, the bouquet is carried today purely for aesthetic reasons. Aside from garlic, wedding bouquets used herbs like rosemary and lavender to ward off evil spirits and mask body odor. Another popular flower was the orange blossom, which was thought to be a symbol of fertility.

Roman and Greek brides wore wedding veils as part of the arranged marriage ceremony. Since most families arranged marriages to increase their wealth and power, the grooms were not allowed to see their brides until just before the wedding. So that the groom wouldn’t be able to see his future wife before the wedding, the veil was used. It’s also possible that the veil served as a barrier for evil spirits, keeping the bride out of harm’s way.

Old wives’ tales about warding off evil spirits by wearing “Something Borrowed,” “Something Blue,” or any combination thereof are superstitions that date back to medieval Europe. Before you got married, you had a solid connection to something from your past. The introduction of something fresh symbolized the union with a new spouse. The belief was that if a newlywed couple borrowed something from a married couple, it would bring them good fortune. The bride’s choice of a shade of blue was a symbol of purity and fidelity.

During pagan celebrations, people would throw rice in the air to symbolize hope for a bountiful harvest. Wheat was thrown if the crops were plentiful, and rice was thrown if the yields were poor. Because it took many people to work the land, the wedding guests also threw rice as a fertility-inducing gesture.

Unmarried women in ancient Rome were required to wear a chastity girdle, secured with a series of knots. To complete the union, the groom would have to untie all of his bride’s hair strands.

In 3000 BC, the Egyptians are believed to have started wearing wedding rings. It was first made of hemp, then iron, which the Romans used as a metal for wedding rings. These days, most wedding rings are made of gold, which symbolizes marriage’s purity and eternality, as well as its continuity.

Doves symbolize peace and new beginnings. According to folklore, the dove that flew from Noah’s ark and returned after the flood is represented by doves. The dove’s olive branch demonstrated that not everything had been destroyed and that dry land and trees were sprouting new life during the devastation.

Bring the light and love of this splendid and super special occasion with Xinar's wedding charms in 925 sterling silver.

View cart “Sterling Silver “I Love My Husband” Charm” has been added to your cart.

Bring the light and love of this splendid and super special occasion with Xinar's wedding charms in 925 sterling silver. 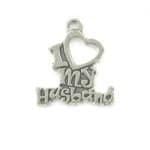