Make your holiday or Easter-inspired crafts and jewelry shine with Xinar.com’s Easter Egg Charm in sterling silver. This is an expertly-detailed silver-casted, hollow-back charm featuring a cute rabbit, ribbons, and flowers across the surface.

So if you want beautiful Easter charms to complete your themed crafting project, you’ve finally found it. Xinar.com has been selling quality beads, findings, and charms on the internet since the 1990s, and we have always focused on quality. We also offer a Best Price Guarantee to all our customers so you won’t have to haggle anymore. The price that you see on each product on our site is already the best price year-round. Save more and shop more with Xinar.com’s extensive jewelry-making catalog.

What’s the History of the Easter Egg?

Eggs are as central to Easter, like roast lamb or a Sunday service in all their forms, whether they’re painted bright colors, hunted down, or devoured on the spot. But how did a secular event become such an essential part of a holy holiday?

Because hens laid few or no eggs over the winter before modern farming, eggs were precious at Easter. Egg production is light-dependent, and if there isn’t enough sunlight in the winter, egg production will stagnate. The hens started laying eggs again when spring arrived. Eggs were so valuable that they were used to pay pastors, parish clerks, and servants a portion of their salaries.

You’d be forgiven if you assumed chickens produced Easter eggs. But, even if you’re forgiven, you’re still wrong. The Easter bunny, a legendary creature who presents eggs to youngsters, is the creator of Easter eggs. The modern rabbit is based on the mythological Osterhase, a German egg-laying hare from the 17th century.

Until the 1920s, only Jutland and the island of Langeland in Denmark practiced the ritual. Today, the Easter Bunny brings chocolate eggs to Scandinavian homes and conceals them in gardens for children to find on Easter Sunday.

The rabbit’s significance at Easter is linked to its historical use as a symbol of fertility — Easter occurs in the spring, a season of rebirth and new life when flowers blossom, and baby animals are born. This ancient symbol of new life has long been employed in Pagan spring rituals. The day when light equals darkness is the spring equinox, and it will continue to grow. Thus, it’s a time to rejoice in new beginnings, with eggs and hares serving as seasonal symbols.

To avoid being outdone by a rabbit, the church presents its interpretation of the significance of eggs during a religious holiday: they represent Jesus’ resurrection. The tomb is the hard shell, and Jesus is the young chick inside. This is a very appealing argument when you consider Easter egg rolling, a classic game of rolling eggs down a grassy slope. This is supposed to be the tombstone moving away, revealing Jesus’ empty tomb (he’s right behind you!).

Easter egg hunts, like egg rolling, are a favorite Easter Sunday tradition. Smaller eggs, frequently wrapped in colorful foil, are hidden in gardens and parks for (hopefully) finding by youngsters.

Why are they made of chocolate? Are they delivered by bunnies, a symbol of rebirth, or a metaphor for a tombstone? Cadbury’s invented the contemporary chocolate Easter egg in 1875, two years after J.S. Fry & Sons of England invented the first chocolate egg. Their creation was aided by the development of extracting cocoa butter from cocoa beans, which allowed for eating chocolate that could be shaped into shapes like eggs. However, the reason for an egg remains a mystery. Most likely, John Cadbury recognized an opportunity to profit from the popularity of Easter decorative eggs by turning them into edible eggs.

The practice of adorning eggshells is quite old, as evidenced by 60,000-year-old illustrated and engraved ostrich eggs discovered in Africa. In addition, Ostrich eggs were frequently depicted in gold and silver in the tombs of the ancient Sumerians and Egyptians.

Decorative eggs have been used since the 13th century as an Easter ritual. Many nations have their unique traditions of egg decoration due to its ancient history and symbolism. Eggs were once thought to be a forbidden food during the Lenten season in Christianity. Therefore people would paint and decorate them to commemorate the completion of the period of penance and fasting. Early Christians in Mesopotamia colored eggs red to represent Christ’s blood poured during the crucifixion. The church continued these customs, with more elaborate decorations and the eggs frequently being presented as gifts. 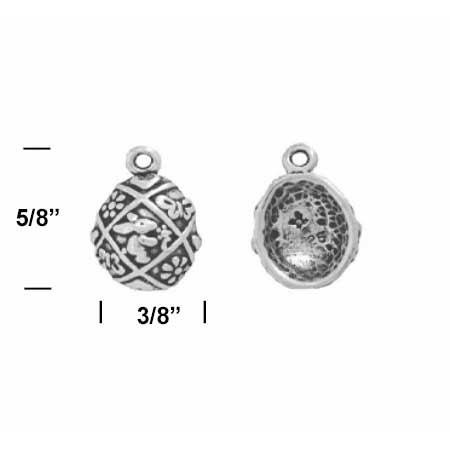 For over 20 years, we have provided great value in jewelry supplies and services to our customers. Xinar takes great pride in our company, our commitment to customer service, and the products we sell.

Xinar will provide you with a safe and secure shopping environment. Shop with peace of mind. There are no deceptive marketing practices like “free shipping” or “massive discounts” from inflated prices.

Do you have any questions, or are you looking for a particular accessory or charm? Please do not hesitate to contact us.

About the Product
Lost Wax Casting
Made from  925 Sterling Silver using a stamping or lost wax casting technology. Exceptional detailed and top quality, guaranteed to be nickel, lead, and cadmium free. Also, all charms originate in the USA, guaranteed to be free from defects.
Additional Information
Precise Silver Casting
Made in the USA by one of the largest casters of sterling silver charms & jewelry. The lost wax casting process creates these charms. The lost wax casting process is ideal for metals and designs that are difficult to make by machine. It is also suitable for alloys with high melting points. A master of the individual charm created a wax mold. The mold is then encased in a plaster cast. Plaster is then heated to melt the wax. The plaster is then placed in a spin caster that fills the cavity with molten silver. You now have a charm.
Shipping Policy

The domestic shipping charge is a flat rate of $3.95, no matter how many items you wish to purchase.

International shipping is a flat rate of $17.00.

There are no reviews yet.

Only logged in customers who have purchased this product may leave a review.

Your cart is empty.