If you have been looking for birthday charms that have been carefully detailed, with an eye out for aesthetics, look no further than Xinar.com’s 21 Charm in 925 sterling silver. This is a flat-back casting measuring 11/16″ x ¾.” It has an ideal measurement for bracelets, necklaces, and other DIY crafting projects. Never fear about balance and ratio when buying any of Xinar’s beautiful sterling silver charms.

Xinar’s collection of engaging and well-crafted silver charms has always been a crowd favorite. Whether you are a DIY crafter or an experienced jewelry designer, the quality of the silver charms/pendants will always matter the overall quality of the design. While there are many substitutes, you cannot determine the true quality until you receive the actual item.

The most common feedback for silver charms from Xinar.com is that people receive identical items compared to what is shown online. In short, what you buy is what you get. Additionally, Xinar.com guarantees that all its sterling silver charms are lead-free and nickel-free, as per FTC standards. Finally, we’re big on ensuring that people don’t get allergies when using or wearing our happy birthday charms.

What is the Significance of the 21st Birthday?

While it’s easy to believe that “any reason” would suffice when it comes to throwing a party, have you ever considered the origins and significance of the 21st birthday?

It’s widely observed and frequently lavishly celebrated worldwide; however, in Australia, many things become legal at the age of 18, including the purchase of alcohol and the right to vote, rather than at the age of 21 as in the United States. So, where did the 21st century begin, and why are they significant in Australia? Let’s see what we can find out! The 21st birthday was inspired by a young man being groomed for knighthood. There were three phases to becoming a knight in medieval times, each lasting seven years.

Seven years old – The boy begins his training as a page. The youngster, essentially a Knight’s servant, would learn the skills needed to become a Knight while serving as a messenger and other basic servant chores.

The youngster would become a Squire when he was 14 years old. The Squire’s principal responsibilities would include carrying armor and shields, caring for weapons and armor, and activities such as saddling the Knight’s horse. This was also the first time the boy had fought alongside the Knight. The Squire would frequently serve as a flagbearer and would be allowed to distinguish himself in battle. A Squire’s job would also include ensuring the Knight was buried correctly if he was killed in one of these conflicts.

Twenty-one years old – At 21, the boy was officially designated a Knight if he completed his two previous positions.  While attending multiple bouts of combat may not sound like a lot of fun, what about all the parties? They are, after all, a more recent invention. The legal drinking, smoking, and attending nightclubs age in the United States is 21.

As a result, a young adult’s 21st birthday marks a crucial turning point in their life because they can now legally engage in more adult activities. Given how much of American culture Australia has assimilated, it’s no surprise we’ve accepted this as well.

Apart from that, the legal drinking age in Australia was not always 18 in all states. In 1905, New South Wales changed the legal age to 18 from 21. Queensland and Tasmania were the first to adopt it in 1974, followed by South Australia in 1971 and Western Australia in 1970. In the US, this special celebration refers to the ability to consume your first (legal) alcoholic beverage, but in medieval times, it was the time when a noble young lad was considered “of age” and knighted.

In the Netherlands, the 21st birthday is commemorated with a lot of fanfare.

The 21st birthday is commonly referred to as the ‘crown year’ because it is believed that this is the year in which young adults begin to be considered kings and queens. Not quite the same as getting knighted, but I’m sure I wouldn’t mind if this were the rule at my house (or should that be a palace?)

Newly crowned Dutch people are usually given a more significant presence, as well as a chair for the dining room table decked with paper streamers and flowers lovingly made by their parents. On top of that, they’ll be served a stack of delectable pancakes. Finally, a supper fit for kings (and queens) will likely make for a unique 21st birthday celebration. 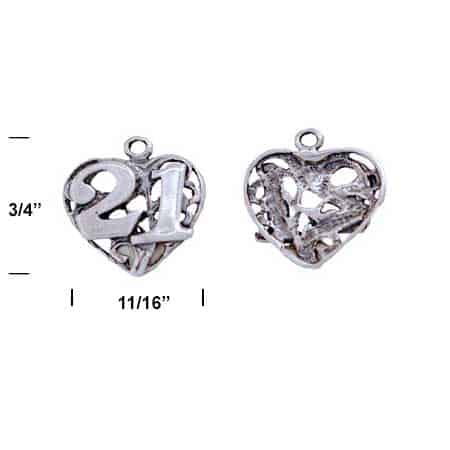 For over 20 years, we have provided great value in jewelry supplies and services to our customers. Xinar takes great pride in our company, our commitment to customer service, and the products we sell.

Xinar will provide you with a safe and secure shopping environment. Shop with peace of mind. There are no deceptive marketing practices like “free shipping” or “massive discounts” from inflated prices.

Do you have any questions, or are you looking for a particular accessory or charm? Please do not hesitate to contact us.

Made in the USA by one of the largest casters of Sterling Silver Charms & Jewelry.  The lost wax casting process creates these charms. If you are not familiar with this process. A master of the individual charm converted into a wax mold. That mold is then encased in a plaster cast. Plaster is then heated to melt the wax. Then put into a spin caster that fills the cavity with molten silver, and you have a charm.
Additional Information

A Leader the Field

Manufacturing Sterling Silver jewelry since the 1980s. This caster boasts the best finishing process in the industry. Its anti-tarnishing polishing procedure is second to none. Shipped complete with Sterling Silver jump rings. Use for these items included necklaces, charm bracelets & beading. Many designs will complement today’s popular bead lines or make wonderful earrings.
Shipping Policy

The domestic shipping charge is a flat rate of $3.95, no matter how many items you wish to purchase.

International shipping is a flat rate of $17.00.

There are no reviews yet.

Only logged in customers who have purchased this product may leave a review.

Your cart is empty.