We know it’s tough to source great-looking fruit charms and vegetable charms, so we’ve made these 925 sterling silver charms more accessible to jewelry designers and DIY crafters. Xinar.com has a beautiful and ever-growing collection of fruit and vegetable charms for food jewelry, barnyard jewelry, fantasy jewelry, and every imaginable theme you can think of.

Make your crafting designs more awesome with silver charms like lemon charms, Serrano chili pepper charms, avocado charms, and yes, we also have a cute peanut charm! You will notice Xinar’s sterling silver charms because they’re very detailed (both the flatback charms and 3D charms). The secret is the method used for manufacturing these charms. Xinar’s pendants are manufactured with the lost wax casting process.

The lost wax casting process requires a skill master caster at the helm, from creating the initial master mold to the final despurring and polishing. Xinar’s sterling silver charms are also hypoallergenic, nickel, and lead-free. Find everything you need to create your best works with our online jewelry-making catalog.

What Do Fruits and Vegetables Symbolize?

Various myths about Fruit have been passed down from generation to generation. It is often associated with goddesses of fertility, abundance, and the harvest and symbolizes abundance. On the other hand, Fruit can also symbolize earthly pleasures, overconsumption, and temptation.

Symbolism and mythology are woven into the fabric of apples. Apple blossoms are associated with female beauty and peace in China. Depending on the culture, they can represent wisdom and joy and fertility, youth, and freshness.

In Greek mythology, apples play an essential role. For example, apple trees given to Hera as a wedding gift by Gaia were among the most prized possessions of the goddesses. The Hesperides, the Daughters of Evening, cared for these trees in a garden in the west guarded by a dragon. Their apples were golden, sweet, and had magical powers. When people throw them, they always hit their target and returned to the thrower’s hand, healing the sick or injured and regenerating themselves as they were eaten.

Heracles needed some of these apples to complete the eleventh of his twelve significant tasks. It was only after a long journey across North Africa that Atlas was summoned to help him in his quest for Fruit. Athena returned the apples to the Hesperides after Heracles took them to Greece.

The Trojan War was sparked by the theft of a golden apple from Hera’s garden, one of the most important events in Greek mythology.

Eris was upset that she wasn’t invited to a wedding feast with the other gods as the god of discord. She arrived at the dinner uninvited and threw one of the apples, labeled “For the Fairest,” onto a table. All three goddesses – Hera, Athena, and Aphrodite – assumed the apple belonged. Asked by Aphrodite to settle the matter was Paris, a prince of Troy, and he gave the apple to her. Hera and Athena aided the Greeks in their war against Troy as retribution. “Apple of discord” is still used today to describe something that sparks debate.

The pineapple is a symbol of sweetness, spiciness, and tropical. Pineapples have been a constant source of inspiration for centuries in decorative arts. They were seen as a symbol of wealth and royalty in the past because they were imported from across the oceans. They were grown in glasshouses in the late 18th century and became widely available to the general public.

Artichokes are symbolically rich vegetables that date back to the Middle Ages. With a delicate heart at the center protected by sturdy leaves, artichokes are lovely to look at and can be interpreted in many different ways!  These trees embody hope, peace, and prosperity

In the Garden of Eden, Adam and Eve immediately come to mind when one thinks of the fig. As a symbol of prosperity, they are revered as sacred fruits. Fertility, wisdom, understanding, and faith are all represented by the seeds in this arrangement.

Melons have long been associated with luxury, wealth, creativity, and gluttony, and this association continues today. So isn’t it fascinating to see how the Fruit has changed over time in Giovanni Battista Ruoppolo’s 17th-century still life?

Melons have a beautiful meaning in Chinese culture, which symbolizes family unity. They hope that the family, like the moon, will remain spherical, encompassing, and intact. You’re not the only one who sees a connection between the banana’s phallic shape and the reproductive organs! Even if you don’t consider bananas a tropical plant, their enormous fronds have been used in the design world for centuries.

We know it's tough to source great-looking fruit charms and vegetable charms, so we've made these 925 sterling silver charms more accessible to jewelry designers and DIY crafters.

View cart “Sterling Silver 3-D Carrots Charm” has been added to your cart.

We know it's tough to source great-looking fruit charms and vegetable charms, so we've made these 925 sterling silver charms more accessible to jewelry designers and DIY crafters. 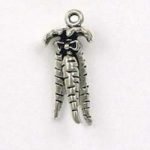